A few weeks ago, for the Golden Globes, I did something I’d never done before: I served health food to a crowd. Now when I say “health food,” I don’t mean the punishing kind that makes you weep with displeasure (tofu on a bed of undressed arugula or something like that); I mean the kind of food that actually makes you feel good, light, refreshed, well-fed but not sick. In other words, the total opposite of the kind of food I normally serve to a crowd (see: chili, lasagna, Sunday gravy, etc). How did this all come about? It started at the farmer’s market.

‘Twas there that I bought these cherry tomatoes (out of season, but I had a solution for that):

The solution was to slice them in half, coat them in olive oil, salt, and pepper, put them on a cookie sheet and to slow roast them in a 250 oven for a few hours:

That’s a pretty magical transformation; they turn sweet and intense, like sun-dried tomatoes only you did it yourself. Where did they go? They went into a couscous salad with tuna I saw the Barefoot Contessa make on her show (recipe here). So that means I made a big pot of couscous, added olive oil and lemon juice and oil-packed tuna:

Then lots of good stuff: the tomatoes, olives, chopped parsley and dill and scallions.

It makes for a great, filling salad, though in tripling the recipe, I think I made too much couscous which diluted the power of the other ingredients. Something to think about for next time.

There was also a kale salad that I made towards the end that involved me just slicing kale pretty thin, tossing it with olive oil, lemon juice, salt, pepper and grated Pecorino cheese:

Oh and toasted walnuts. That was nice.

But the star of the show was the salad that I made with farro, chiles and cauliflower. People went nuts for it. Are you ready?

Step one: buy red chiles (I think these are serranos? I’m sure I’ll be corrected) and carefully cut them into rings. Then add the rings to a pot with 1/2 cup or more of white wine vinegar, bring it to a boil, then turn off the heat.

We’ll come back to that momentarily.

Now take a head of cauliflower, cut it into florets, toss them with olive oil, salt and pepper, put on a baking sheet and roast at 425–shaking every so often–until the florets are deep golden brown all over, about 20 to 30 minutes.

When they come out of the oven, immediately douse–or aggressively sprinkle–with your spicy vinegar mixture. Taste to see how that’s going. It should taste pretty rad.

Meanwhile, you should cook up a pot of farro (that’s as easy as bringing salted water to a boil, adding the farro and cooking until done) and then dress that farro with olive oil and more of your spicy vinegar to taste. It should also taste pretty rad.

Finally, you add the cauliflower to the farro, add chopped parsley, and then rev up the flavor with some of the actual pickled chiles and spicy vinegar and more salt. Look: 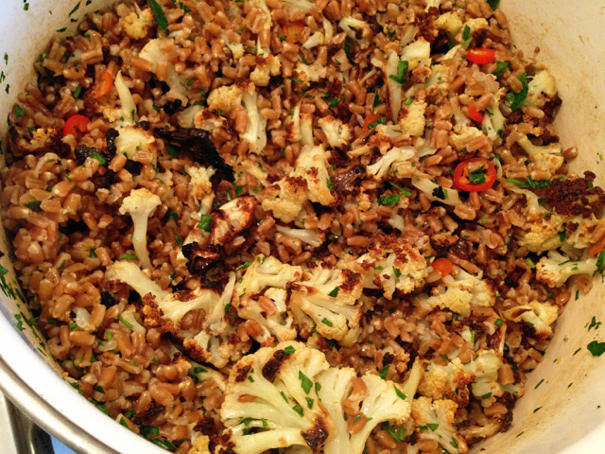 That was soooo good. Here’s all three things on a plate:

Who says dinners for a crowd have to be unhealthy? Diana does. She brought the incredible chocolate chip cookies that she makes from David Leite’s recipe:

It’s ok: after our healthy dinner, we deserved some cookies.

And that, my friends, is how you make a healthy farmer’s market buffet. Try it for the Oscars!

Thank you for subscribing.

we respect your privacy and take protecting it seriously